A Year Opens, Oh what a Gift!

Well, well,well! That was quite a weekend!
Friday ended up being less busy at work than I expected, but busy enough that I wasn't bored by any means.  After closing up for the night I went home to what seems to be a perpetual argument about where to eat with my family.  Earlier in the week I'd suggested a Thai place that we'd gotten a gift card for over the holidays.  Since it was sort of in celebration of my birthday, my husband said it would be my choice.  But by Friday night, when I was already starving and wanting to head out, my younger son started to complain that he didn't really love the food there.  The family debated this and that, meanwhile I was getting so hangry.  Finally by 7pm three of us were heading out to our favorite local, high-quality chinese place and we brought some home for my other son.  It was fine.  The rest of the evening was pleasantly quiet and relaxing.
Saturday, after getting the grocery shopping done, my dad and his wife came to visit.  I put out a snack tray with cheese, crackers, praline pecans and summer sausage.  We nibbled all day.  Then his wife also brought a tray of cookies that we all nibbled on too.  To me, it was worth not eating cookies all last week in order to not feel bad about eating some on Saturday.  I did find that eating them led to cravings for me, not entirely sure if it was physical or emotional, but I was aware of it and didn't give into them; I knew if I didn't eat more sugar the cravings would go away and they did.  My dad gifted us a bottle of his homemade cherry wine and brought old family photos at my request.  I grew up with very little connection to my extended family.  Sure I knew my parents' brothers and sisters, but as far as my dad's parents/grandparents, I didn't even know their names.  So, my dad and I looked through the old photos and talked about these people who felt like strangers to me.  He explained that, when he was young himself, his family sort of became estranged because his grandfather owned a tavern and liked to drink more than the others, so they sort of branched off and did their own thing.  My dad expressed disappointment in his own father, saying he would never come to visit, making excuses that it was too far to drive as he got older.  My dad was so proud of his new house and young family and it hurt him that his dad wouldn't come visit.  So, bitterness and pride kept me from really knowing my grandpa, and then he passed when I was 7.  I snapped pictures of the photos, marvelling at how old some of them were, and realized as I listened to my dad talk about his relatives, that this simple act was healing for both of us, and it was helping bridge the gap between us as well.  What an amazing gift!
After they left, I spent a good amount of time on findagrave.com looking up as much information as I could find about my relatives.  I was amazed to find enough information (for free, no less) to trace my family back to Germany, even to find the name of the city where 4 of my relatives were born, my great, great, great grandparents.  There was even a picture of my great great great grandpa. 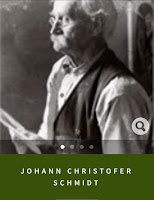 How cool is that?  It makes me feel whole in a way I have yearned for for some time now.  So that was the first healing thing of my weekend.
In the evening, my husband and I began to sip the wine my dad brought, and it led to more drinking than I was planning on.  We had wine and champagne, and I really did want to stay up to celebrate the changing of the year and I made it.  My husband and I got into deep conversation about energy of those who've passed, and I ended up confessing things to him about my friend Lisa, how I never mourned her but I still feel guilty for not going to see her when she was sick, and how I felt like, when we worked together, there was something she needed from me, support or inspiration, not sure what it was but I felt like she needed me and it made me feel really guilty for not seeing her when she'd suggest we should get together for a lunch.  He told me the best thing I can do is to talk directly to her and release her and be able to feel her releasing me.  I was crying a lot that night and haven't taken his advice yet, but I will.  Just talking about it with him helped me feel better about it, so that was the second healing part of the weekend.
As midnight approached, I turned the TV on for exactly 2 minutes to see people happy and celebrating.  My family gathered around and celebrated as well and I let out a couple of "Woo hoo" cheers.  Despite already being more buzzed than I planned on, it was a high note, and I genuinely felt like there was a collective sigh of relief that we'd survived 2016 and are ready for a fresh start!
Sunday I woke with a huge hangover, pounding headache, turning stomach, and with less than six hours of sleep, I just genuinely felt like not doing much.  We had a lazy morning, then I told my husband that some greasy fries were always my most reliable cure for a hangover back when I used to have them frequently.  He suggested we go for a short drive to a place he'd heard had the best burgers in the area.  I was getting a little more ancestry work done and really didn't feel like going out, but figured maybe some fresh air would be good.  The place we ate was a total dive, but it was steeped in history and it was kind of fun being out.  There were a ton of people out drinking which made me shudder, but we had our greasy lunch (I had a fish sandwich, which tasted a lot like McDonald's fish sandwich) and I began feeling better.  Afterword we took a small drive since we were in a small town we were unfamiliar with, we decided to see if there was anything there to see.  There was a few old churches with interesting cemeteries, but not much else.  We ended up by Lake Michigan and caught an amazing view of the waves, some full of ice chunks, washing onto shore and freezing there. 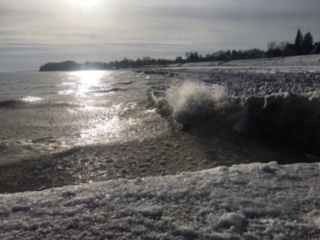 We don't typically go by the water in the winter, but I'm glad we did yesterday because it was breathtaking!  Even though I was nervous about someone slipping on the ice into the harsh waves below, it somehow felt cleansing to watch the waves crash on the ice while the sun gleamed at us.  For me, it reminds me of all the wonderful trips we've taken there when the weather is nice and it made me think of how it's going to start warming up in about 4 months and we can start planning our little weekend beach trips.  So there, of course, was healing experience #3 for the weekend.  I was pretty lazy the rest of Sunday night, but I did send out some family photos and information to my sister and cousin, just another connection we can share.  I started to think about how our familiies decided for us that we wouldn't be that close, something that was passed down through the generations.  While that explains some things for me, and helps me release a little more bad feelings, I think maybe it's time to reconnect and end the chain.  It's too bad my family was divided or estranged, but we don't have to pass those feelings onto the next generation.  I am so lucky to still have my parents with me.  I will make an effort to connect with them and my sister more.  As I found out, aside from my mother's side having horrific amounts of heart-related deaths, my father's side has a huge amount of cancer-related deaths, including my aunt, who is currently losing her battle with brain cancer.
So, despite feeling extra sleepy and sluggish and wanting to just relax before going into work late this morning, I actually got on the bike and put in my half hour of work there.  I reminded myself that this is not to look pretty or boost my self esteem, this is to be healthier.  And since there are a lot of different ways I can acheive this, I chose the one that sounded the best and rocked it out.  A half hour on the bike is getting less torturous and I do like the fact that I can do other things at the same time, it makes the time pass without me being overly aware that I am working hard.
This has been a pretty fulfilling weekend, and I can tell it just the beginning of what is going to be an amazing year!