Uh, Yeah, I Think So

Last week started with a bang, and ended up having my coworkers concerned about my color.  It was a case of my body defying my mind, my energy sucked into the same void that the weaknesses in my blood have foregone.  I was looking a little pale and pastey, and felt that all-too-familiar exhaustion that I thought I was leaving behind me.  So the latter part of the week I rested and did not work out.  But I ate squeaky-clean, and I am finding it easy to stick with my meals lately, which consists of two things I really like, a walnut-meat taco salad and coconut milk "yogurt".  And adding the extra veggies felt like I was doing something really good for my health.
Yesterday, my husband suggested we go to a local park called Fonferek Glen.  It is a breathtaking place only a few minutes drive from our house, but we have never taken our kids there, for fear they would fall off one of the many drop-offs and cliffs.  Now that they are older, and slightly less clumsy (one of the trademarks of Autism unfortunately), we decided to give it a try.  I wasn't necessarily looking forward to it, not just for the fact that it was nearly 90 degrees and I could feel my sun allergy daring me to let it blossom, but because of the anxiety that would attack me, as he brought my sons ever closer to the edges of the cliffs to have a better look.  Both of those annoyances did happen, and I tried to remind myself that everything was going to be OK.  The three of them walked around nonchalantly as if it was an ordinary walk in the park.  We had views like this: 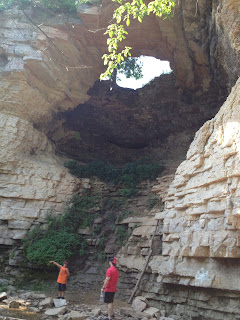 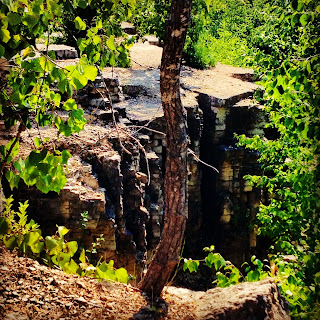 And I am in no way denying it's beauty.  We even walked all the way around the top of the opening to have a look down from the top.  That made me really nervous, you only get one chance to make a mistake up there.  But the part that really ended up ruining my time was walking across the dried up waterbed, the rocks were ALL loose.  And I really mean that, not one of those darn things was solid.  It REALLY.BOTHERED.MY.KNEE.  But I kept on following my family for an hour, always way behind, always questioning my balance and my knee, always feeling lame like I was ruining everyone's time.  At one point, my husband decided to take a "short cut" back up to the top, which meant climbing up two steep, gravel, root and rock-laden hills.  My knee was ready to give up by then.  I was cursing in my head, feeling old and useless and though I've never considered myself athletic, I was feeling completely ungraceful and out of place out there, crawling up a hill, favoring my sore knee and using my hands to help me balance.  My husband tried to feign pity for me, then in the end when I nearly fell from the top of a really steep hill, he cheerfully chimed, "You've got this, you just have to have confidence in yourself out here."  And in that instance, tripping on a tree root and nearly falling, I realized that when it comes to physical things like this, I don't have confidence in my abilities anymore.  I watched them hop from rock to rock as if they were frogs hitting lily pads with computer-like precision, me giving up and walking through the shallow water, so I could save any amount of dignity.  After walking in a nearly shade-less 90 degrees for over an hour, it was the only thing that felt good at that moment.  I was so happy to get home and take a cool shower and wash my day away.  Later that evening, we went to dinner in a quiet Thai restaurant set in a turn-of-the-century building in the downtown district.  I love the wooden floors and the moulded ceilings, that I imagine are original, because it adds to the charm.  They always play soothing Thai music that reminds me of my trip to Thailand.  My family likes it too, there is tofu and noodles, what's not to like?
This morning I weighed myself for the first time in a couple weeks.  It doesn't really matter what the scale says, I have been doing positive things and I am starting to see good things.  There are parts of my body that are looking better.  I am doing just what I can, putting in my work when my body is up to it, and trying not to let my deficiencies be an excuse to sleep more when I can be out doing something.  This morning my younger son and I went for a walk, and he decided he wanted to walk to a certain park, which is about 1 and 1/2 miles away from our house.  Despite the blazing sun and my already itchy skin, I agreed.  It is really hard to say no to my sons, especially when they are asking to do something good for them.  While my husband and older son slept more, Zach and I set out on a long, tiring journey.  When we got to the park, we took our shoes and socks off and cooled our feet on the shaded pavement.  And we talked about life.  And before we knew it, we were headed back, pointing out animals and flowers we saw along the way.  And we agreed to not walk that far next time.  And I realized that, he is someone who is at times too confident, and at others,  not so much.  He is so much like me.  And I wonder if this is something one can "fake it" on.  I don't trust my knee or my muscles right now.  I know I can use them to some extent, and I have been being safe and smart when I do go to the gym, but I don't have my confidence now.  Not for jumping on rocks, or climbing slippery hills or doing squats.  It reminds me of the theme song of Bob the Builder.  The characters are all singing, "Can we fix it? YES WE CAN!"  but just at the end, Lofty chimes in, in a very shaky voice and says, "Uh, yeah, I think so."  I am Lofty.  I only think so.  But in the end, the team always pulls together and gets the job done.  I don't know if I'll ever be good at hopping on rocks with my boys, I'm thankful my husband is, but I suspect I can build my strength and confidence back up.  Just showing up is the first step.  And I am showing up more and more. 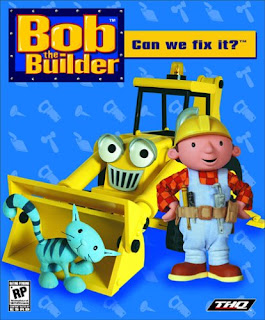