Getting Down with my Funky Little Self

This week has been really nice, having the extra time in the morning due to my kids having the week off.  I can get up at my usual time (5 am) take the dog out and feed him and still have time to get 30 minutes of exercise in before eating and getting myself ready.  Today I danced.  To indicate how long it has been since I last made an effort, my most recent single-song purchased (to dance to) is Uptown Funk.  And, I have many older than that, dating back to the late eighties/early 90's, the days when I was out dancing with friends.  Oh yeah, it's definitely time to update my play list a little!  lol.  Dancing is something that is natural for me, when the music comes on I can't help but dance, and before long I get lost in the fun and a half hour I am a happy, sweaty mess.  A lot of times, when my time is up (usually dictated by my schedule) I am a little bummed out because I'm actually having fun and don't necessarily want to stop.  I don't really feel that way about any other activity be it walking, biking, or strength training.  Dancing gives my legs a good workout and even my abs get in on the action, and I know it's doing something because I do break a sweat.   Anyway, I danced for a good half hour and was singing and smiling the whole time.  I was really tired this morning too, because I took a nighttime sinus medicine at bed to help with drainage from this cold.  And once I got my shower out of the way, I was feeling pretty stinking awesome!  That is not something I can say everyday, so it's kind of a big deal as far as small miracles go!  So, as part of my no-diet mentality, I was also rejecting hardcore exercise mentality where if you aren't beating yourself up to try and get fit, you are weak and lazy (Oh I deplore that kind of thinking, even though it's meant to motivate I think it is very counterproductive) and I happened upon a hardcore-fitness fanitic aquaintence of mine on Pinterest and amid all the memes like I was just mentioning, she also had this particular one: 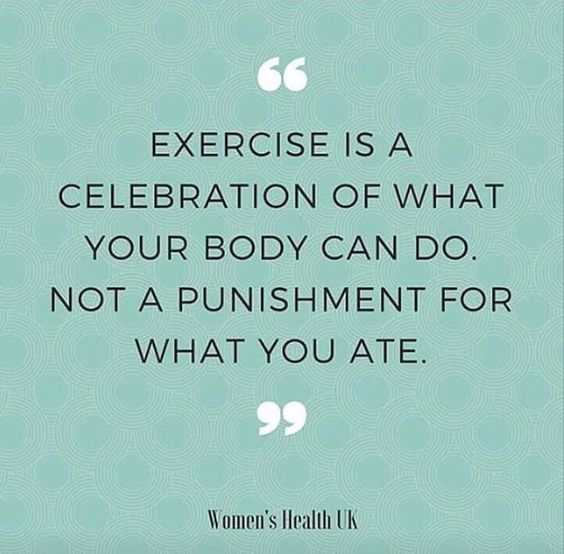 Now that is a sentiment I can get behind!  As I was dancing today I was thinking about how happy I am that I can still "get down" like that because it truly is enjoyable.
As I was getting dressed today I was a little surprised to see the way my body is changing because it seems to be changing in a different order than in the past.  This time, my hips are shrinking faster than the stomach area.  This is odd for me because my hip area has been a trouble spot for me, even when I got down in the 150's I hated how that part stuck out of my cute shirts and dresses while my stomach itself was much flatter.  It seems like every other time I started losing weight, my lower abs where where everything just stuck even when the rest of me was shrinking steadily.  This could be partly due to the uterine polyp I have recently had removed.  Even though the polyp was only a couple inches long, it caused my uterus to be enlarged to the point where breathing felt harder.  So, sometimes when I think about that surgical procedure and want to convince myself it wasn't totally necessary, I'm really happy I did it, not just for this tiny thing, but it reduced a lot of pain and led to easier breathing, even before I lost some weight.  My face is also thinning out, which is bittersweet because there's less fat there to prevent the wrinkles from taking over!  lol.  I try not to care much about wrinkles, I still look fairly young for my age and ultimately, who cares!  I saw a meme recently that said something about how other people's opinion of me is their reality, not mine.  Everyone wrinkles, everyone ages, the only reason we make such a big deal about it as a society is because we fear death and the stuff that comes just before it.  I think, if we truly find things in our lives that bring us joy, no matter what else is going on around us, we carry that joy with us all the way to the doorway of the next place we go and beyond.  That little piece of magic is what matters in life.  Have you ever met someone who knew they were going to die, perhaps someone who was diagnosed with terminal illness, and even though they were young, they felt content and were ready?  I have.  She meant a lot to me and she only had a little more than a year after being diagnosed with terminal cancer.  She was only 45 when she got the news, still a young grandmother who doted on her grandkids, and she spent her time doing the very things that brought her joy, being with family and friends, giving them a few more memories of her to take along after she left.  She was scared, of course, and worried for her own kids, grandkids and husband, but she seemed to have a certain sense of peace and contentment that most of the people I've met just don't have.  She found her joy and purpose in her family and she felt it every day until she left.  And her family still celebrates her and her friends still share stories of her and she was just a bright person.  I think one of the most meaningful things we can do is to find that in our own lives, and celebrate it and share it and show others how to find their own.  There is too much dark stuff around us, I think it's about time we find our individual shine to light up all the dark places.  With a new year around the corner, instead of making unrealistic resolutions I think I am going to vow to find and do more things that make me happy to my core.  How's that for a rocking New Year's Resolution?!  What do you resolve to do in the New Year?