The Snow Storm that Wasn't

Anxiety tried to get the better of me toward the end of last week, with my mother and my doctor appointments and the dreaded Snowstorm Bailey all mixed in with impending horribleness of the monthly about to knock on the door any time now.  I am so glad I took last Thursday off to get stuff done.
My physical exam was first, and I was a little stressed out in the morning because my appointment was scheduled early and I ended up having to drop my older son at school because making him walk when it was -22 degrees with the windchill was not going to sit right with me.  But, in the end, the timing was perfect.  I was immediately comfortable with her, this middle-aged, overweight woman who was warm and smart and even shared a few funny ancedotes with me.  I was all ready for all my numbers to be good.  First step, the scale.  I have looked to this moment with bittersweet anticipation.  I know in all good sense, that the number doesn't mean much, but I admit I was curious where 2 and a half months of eating better, with very little exercise, got me.  It got me from a starting point of 206 down to 190.  That was my first disappointment.  It was a kneejerk, emotional reaction, but I did realize that I had already eaten for the day, and I reminded myself that 16 pounds gone is damn close to 20 pounds less than I was.  My new doctor was impressed, or at least feigned it well.  Blood pressure came next.  I was pretty positive this would be improved, especially since I hadn't had any caffeine before my appointment, so I was surprised to see 130/92.  That bottom number is definitely high for me.  That bothered me more than the weight thing, because as long as I am healthy, I really don't care about the number on the scale, and I have always considered blood pressure a huge indicator of health.  Heart disease runs rampant in my family on both sides.  I tried to ignore that and answered her laundry list of questions about have I ever had a broken bone, and have I ever been told I have degenerative disease, etc.  As I answered all of her questions, the only ones that made me cringe a little were the one about my caffeine consumption and the one about how often do I go to the dentist and what state are my teeth in.  It has been 12 years and I am starting to notice some of my fillings deteriorating.  Cringe.  I hate the dentist.  Honestly, up until a few years ago, I don't think we could have afforded to go get things fixed, the dentist is SOOOOO expensive even with insurance.  But now I have no excuse other than I know I'm going to get lectured and I'm afraid to know how bad my teeth are.  I am noticing in other weight loss blogs that lack of good dental care is somewhat common in people who are overweight.  I guess we take lack of self-care to every level.  Anyway, the physical was fine, since I had the polyp removed and the NovaSure procedure done we didn't have to do the typical stuff.  She looked at a bump on my upper arm and thinks it's a scar under the skin, but it a little concerned that it changes shape/flattens out sometimes.  I may decide to have it removed at some point.  I had some blood work done today so I'll know what my cholesterol and vitamin D levels look like.  She is recommending calcium scoring for my heart, to see how much plaque is built up in my arteries, since there is such a strong family history, but she said if my cholesterol is in a good range that it may not be necessary.  It's only $50 if my insurance doesn't cover, so I think I might do it regaurdless.  My dad had 5 blockages in his heart and 3 of them were more than 90% blocked, he didn't have symptoms until the day his wife took him to the doctor.  Scary stuff!
After my phsical I had my mammogram done, which doesn't really bother me, especially since I don't do self-exams.  My doctor actually told me that they are no longer recommeding self-exams anyway, I guess it's really not very effective, especially if you have a lump big enough to feel on your own.  Yearly mammo's are better.  That was done quickly and I was off to the grocery store, haircut and Target for a few odds and ends.  I wanted to make sure I didn't have to do anything over the weekend while we were getting the snowstorm.  Then my last appointment was at 3 pm, my allergy doctor who put me on an acid blocker under the assumption that reflux was causing my breathing issue.  Since I have been on the acid blocker I have had a ton less junk in my throat and haven't felt like I can't breathe.  Amazing what the stomach can do!  My blood pressure was retaken at this appointment, and it was much better, 126/72.  That made my whole day!
Friday there was a big buzz/panic all through the city.  A bunch of places were closing early and reports were coming in about how aweful the roads were.  I was nervous to drive home, but once I got on the road, I just talked myself through it, the roads were really not too terrible.  I was even comfortable enough to stop at the corner grocery and pick up a few extra bottles of wine so we could be even cozier while being snowed in all weekend.  We ordered pizza and watched the Office and drank wine.  It was cozy and relaxing, especially since I knew none of us had anywhere we needed to be all weekend.
Saturday it snowed more and while it was pretty, I was happy I didn't have to drive in it. 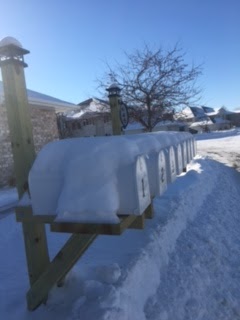 I think all together it ended up being only 5 inches instead of the 7-11 that was predicted.  I still stayed in all day and finished unpacking and hung up all of our artwork/decos.  It felt really good to finally have everything put where it belongs.  There's something so refreshing about organization; probably because it is so very rare in my house!  The rest of the weekend went smoothly, and it sure was nice to stay in for an entire weekend and get things done.  I didn't go too crazy with eating because I was too busy to stop and I drank a TON of water.  Other than 2 pieces of pizza on two different days and some wine, everything else was pretty clean.  I'm OK with that because my weekdays are usually pretty clean.  My anxiety over the snow was what drove me to have wine, I haven't had any in a few weeks, but I'm OK with having some wine from time to time too.  Everything is going in the right direction so far.  If my cholesterol tests come back bad, I will certainly have the calcium scoring done and add exercise into the mix.  If my cholesterol is fine on my current program I may just keep plugging along the same.  I am eager to find out the results.
Well, I hope everyone who got hit by the snow made it through OK and for those who are in warm areas, appreciate every minute of it this winter!  Happy Monday!